November 18, 2020
So, COVID-19 is just a flu? Yeah, nah (as we say in New Zealand). COVID-19 didn't exist in humans until the end of last year. Since then, 1,343,153 have died (3.39 pm, 8/22/20 Worldometer). That is, 1,343,153 people who may or may not have died in the interim, but have been lost because COVID-19 hastened their death. At the moment, about one person dies every minute in the US. And this pandemic is still going strong and on the increase in many nations. Who knows what the final death toll will be?   We all know what kind of outcry there is when one horrific event occurs that takes lives. In NZ, we have had a few disasters in the last few years. Twenty-one people died on 9 Dec 2019 in an eruption on White Island. Fifty-one people died on 15 March 2019 in the mosque attack in Christchurch. Earlier, 185 died in an earthquake in Christchurch, 22 February 2011. And we all remember 9/11 when 2977 people died in 2001. The previous worst disaster in the 21st century was the 2010 Haiti Earth
Post a Comment
Read more

Some Thoughts on Covid

March 20, 2020
Here is a video expressing some thoughts on Covid. Responding to Covid-19
1 comment
Read more 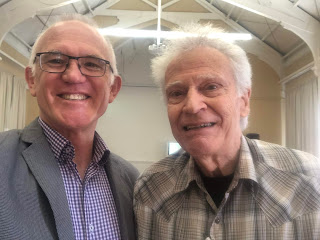 In October, I preached at a new church plant in Newmarket, the Journey. It was a pleasure to have an opportunity to speak to an enthusiastic group of believers there. As a part of my message encouraging people to share their faith, I told the story of my conversion. I shared how I had grown up in a home where neither of my parents was involved in church life. I attended Tereora College in Rarotonga and was in the fourth form. One of my friends invited me to come with him to an afterschool Christian group run by a man by the name of Brian Chitty (that is him in the photo above). I explained how I had come to faith, found it hard to maintain that faith through my teens and early twenties, but then recommitted my life to Christ in my mid-twenties some ten years later. I went on with the message which was well received. I was stunned after the service to be approached by a woman, Rhema, who told me that she was Brian’s daughter. Unbeknown to me she attended this church and w
6 comments
Read more

Our Bottom Line is You! The Naivety of National

August 02, 2019
I haven't blogged on politics for a while. I have had all sorts of thoughts but it is National's latest slogan that has led me to break my silence.  I see with interest that National has a new slogan: “our bottom line is you” ( https://www.nzherald.co.nz/nz/news/article.cfm?c_id=1&objectid=12253263 ). Here is a brilliant example of the naivety of this National Party leadership. First, it is naff! It is insipid. It is sickly. Get me a bucket. “Our bottom line is you”—what does that mean? It's kind of a reworking of “its all about you.” None of us can take that seriously because it is weak and puerile to the core. Second, be real National! The bottom line is winning the next election. It is either getting over 50% of the votes that count to win. Or, getting a coalition partner and together getting over the line! There is no coalition partner. Hence, you are destined to wallow in the opposition for another round. Get on with making that happen. Third, I
2 comments
Read more

July 18, 2019
In recent years, Emma and I have become cyclists joining NZ Cyclist ( http://nz-cyclist.spruz.com/ ) to get fitter and make some new friends. The group is full of great guys and gals, real salt of the earth kiwis, all of varying abilities. Four or five times a week different groups career around the streets of the Shore and into the countryside. It is hard work but great for fitness and friendship. Aside from being uber-frustrated at the moment at being way too busy to get out often, we have fallen in love with cycling and the people we ride with. When you join a group like this and get into group riding, you learn that there is a real art to cycling, including the idea of drafting. This is when you cycle very close to the rear wheel of the person in front of you, to a degree you get sucked along by those leading you. Drafting is highly advantageous as you use far less energy than the person on the front, although there is some gain for the lead rider as well ( http://www.explor
1 comment
Read more

Is Colossians 1:29 an Example of Hyperbole?

July 18, 2019
Paul says Colossians 1:23 that the gospel which the Colossians heard through Epaphras and which is spreading through the world (Col 1:6–7) has been proclaimed in all creation under heaven. Scholars deal with it in different ways. Hendriksen and Kistemaker understand by this that as the gospel has reached Rome, “it had actually invaded every large center of the then-known world” ( Exposition , 85). This is patently incorrect as there were centers north, south, and to the east that were both known and a part of the world. Ernest Martin suggests that we should not push this statistically, but it speaks of the gospel’s universal application ( Colossians, Philemon , 83), a view others hold to (e.g. Ash). Osborne considers that the gospel is being proclaimed in every part of the world and so there is hope for all of creation to be brought back into harmony with God ( Verse by Verse , 50). Pao similarly sees here not hyperbole, but the universal scope of the gospel and “cosmic submission t
Post a Comment
Read more

Considering Paul's Understanding of the Church as Family

July 18, 2019
When we talk about Paul’s view of the church, often we emphasize the ideas of “the body of Christ” and “the temple of the Spirit.” These ideas are to be sure very important to Paul. The body of Christ motif is found in passages focused on spiritual gifts whereby the community of believers who make up the church brings their diverse gifts together in unity in service of God (Rom 12:5; 1 Cor 12:12, 27; Eph 3:6; 4:12, cf. Col 3:15). The church is also considered by Paul to be the Temple of the Spirit meaning that the dwelling place of God on earth is believers and the people of the church as a community (1 Cor 3:16; 6:19).  In Ephesians 2:20–22, the church is founded on Christ, the apostles, and prophets, with all believers built into the one building. There is a shift from the idea of the Jerusalem Temple as the palace of God—we become this individually and corporately. Yet, clearly, Paul’s primary understanding of church is the family of God. He uses the notion explicitly on occasion
1 comment
Read more
More posts